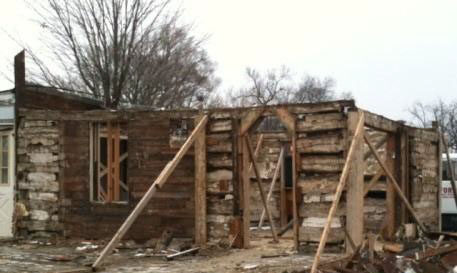 In 1837, LeVasseur traveled to his native Quebec Province to recruit more French-Canadians to Bourbonnais Grove. Due to political, economic, religious, and agricultural problems at home, many of the Quebecois welcomed his words and made the journey to northeastern Illinois to what would become part of the French-Canadian Heritage Corridor. French culture was prevalent, and French was the primary language in the corridor until the 1960s. The Log Schoolhouse, once rebuilt, will attest to the historic French presence there.

to rebuild Kankakee River Valley’s First Log Schoolhouse (1837-48) to be located on the Adrien M. Richard Heritage Preserve west of Letourneau Home/Museum in Bourbonnais. This area’s first one-room log schoolhouse was demolished in 2011 but 60% of the original logs were removed and stored and will be used for this project.