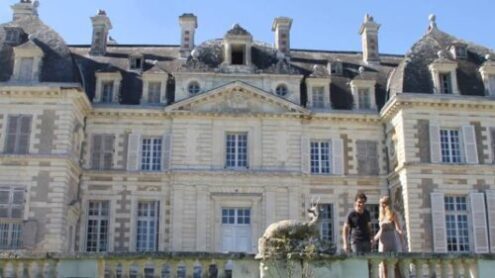 The Château de Purnon and its outbuildings were built between 1772 and 1791 for Antoine-Charles Achard, Marquis de la Haye, page of the Duke of Orleans, then lieutenant-colonel of the cavalry. Due to the French Revolution, the marquis was only able to enjoy his newly-built château for a brief time as had to emigrate in 1791.   The château is little known, having always been only privately used and having only had three families who owned it since its construction. In 1893, the château was bought by the Marquis de Rochequairie and after a relative period of alfluence, WWI marked the end of a flourishing period and saw the gradual deterioration of the main buildings of the estate. In May 2020, after more than a decade of abandonment, the property was bought by an Australian couple in love with France who are determined to save it and live there.

the stonework of the façades, and sculpted décor, the slate roof, gutters,  and the oak-frame support structure of the roof in Philibert de l’Orme style.